This guide helps users get started with writing a SAS program/code for RTRA purposes.

As described on the StatCan webpage, "the RTRA system is an on-line remote access facility allowing users to run SAS programs, in real-time, against microdata sets located in a central and secure location". Statistics Canada provides multiple avenues to access data and statistics: StatCAN census profile tables, CANSIM, RTRA and RDC. RTRA is appropriate for researchers looking for aggregate data that is not available through PUMFs (Public Use Microdata Files) but have too little time or too small a project to request access to the RDC.

To begin your application process, follow the instructions. It takes one week to create an account. Once approved, you will receive one login for 1) the EFT service to submit your SAS program online and 2) the FTP server to access and download survey resources that will help you in writing your SAS program. To access the FTP server, download and set up FileZilla using the instructions here.

The following resources are useful to begin writing your SAS program.

You can write a SAS program from scratch or modify the survey specific sample SAS code provided on the FTP server (usually called SampleProgramEng.sas found under the Example Program folder of the survey directory). Not all surveys provide a sample SAS code.

Note: The data step is necessary even if you are not modifying the original dataset because you cannot refer to the RTRAData library in the macro step.

The SAS code for the data step has the following structure below. Each line (statement) ends with a semi-colon. The final statement run is used to execute previous lines of SAS statements. The asterisks are meant to be replaced with the appropriate parameter names.

Below are the definitions of the parameters to be replaced.

To drop observations (i.e., subset) use the if statement

Eg. Drop all values of gender with a value of 1

Eg 2. To delete cases where the variable education has missing values [dot=missing for numeric]

To create a new variable which results in a new column

Eg. Create a new variable days that converts the variable year from the original data set

Eg 2. To convert a character variable age with a length of 3 digits into a numeric variable age2

To recode a variable

Eg. Say a variable maritalstatus has values 5 that we want to recode (regroup) as 4

Additional documentation on SAS statements used in the data step can be found here and here.

The SAS code for the frequency and mean macro procedures hav the following structure below. Again, the asterisks are meant to be replaced with the appropriate names. The definiton of arguments follows after the SAS code for each procedure. The SAS code/list of arguments for other procedures can be found here. Note that not all arguments are always necessary when running a procedure. For example, the ClassVarList variable may not be necessary depending on the output desired and the procedure used. When this is the case, simply omit the ClassListVar argument (the entire line) from the SAS code.

Below is an example of an RTRA SAS code. 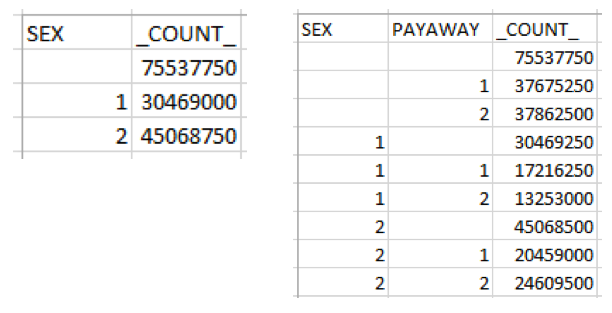 RTRAPercentDist gives the relative frequency or percentage of observations at each level or combination of levels of the Class variable(s). When more than one Class variable is specified, this procedure is equivalent to cell and marginal percentages in a 2x2 frequency table. The weighted count is also provided.

RTRAProportion gives, within each respective category of the Class variable(s), the percentage of observations at each level of the ByVar variable. The Class variable is the grouping variable. This procedure is equivalent to row and/or column percentages in a 2x2 frequency table. The weighted count is also provided.

The image below shows the output tables from the PercentDist procedure (left) and the Proportion procedure (right).

RTRAPercentile gives the value of the AnalysisVar variable below which a certain percent of observations fall (i.e., the Nth percentile of the AnalysisVar variable) for each level of the Class variable.  You cannot run this procedure without a Class variable. You can choose 3 percentiles to calcualte from the following list: 1, 5, 10, 20, 25, 30, 40, 50, 60, 70, 75, 80, 90, 95, 99. The weighted count is also provided.

The image below shows the output tables from the Mean procedure (left) and the Percentile procedure (right).

RTRARatio gives the ratio of the totals of two continuous variables (NumeratorVar and DenominatorVar) at each level of the ByVar variable. When a Class variable is added, the ratio is given for each combination of the Class and ByVar variables. The weighted count is also provided.

Higher-order statistics can be calculated using modified versions of these procedures. You can learn more about such procedures here.

Once you have completed your SAS program, you want to submit it!

It takes a few minutes to run the code. You will likely receive an email when the output is ready.

The output files will be available for 7 days before they are deleted. The files are ordered by RTRA code number. Use the time of submission to find the most recent output files.

The statistics reported in the output tables are rounded to the nearest rounding base. The rounding base for each survey can be found in the RTRA parameters webpage.

You will find rows in the output tables with blank cell(s). The statsitics in a row with a blank cell is not broken down by the variable in the blank cell column. In other words, the statistics in that specific row is reported as if that variable was not included in the analysis.

It is not uncommon to get errors when you first submit your program. Use the checklist below to check and debug your SAS program.