This guide gives users an introduction to Stata. The topics covered are importing, exploring, modifying and managing data.

This guide has been created using Stata IC version 16.1. The main dataset used is the flights dataset. It contains the US domestic flights in January 2020 [1]. The other two datasets used are fabricated datasets created for the purpose of this guide.

The link to the recording of this workshop can be found here. Additional resources are listed below. If you need assistance, fill out the support request form.

There are three ways to run tasks in Stata. You can use point-and-click to execute tasks using the dialogs from the Data, Graphics and Statistics menus.

You can type Stata code in the command window and submit the code by hitting the ENTER/return key.

Some useful commands to get started:

Dir and ls both show the content of the current directory.

The use command can be used to import a Stata dataset. Every time you import a dataset, it is good practice to add the clear option to clear any dataset that is loaded in memory. Options are added after the comma.

Describe enumerates the list variables, their data type and their labels. Codebook gives a frequency table for character variables, basic statistics (mean, std dev etc) for numeric variables and the number of missing observations for both types of variables.

List can be used to print data values in the results window. It allows users to specify the variables and observations to print.

Sum is an abbreviation for summarize. It gives summary statistics of numeric variables. We can add conditions to a line of code using the if qualifier. For example, we can get the summary statistics of flight distance for flights that took place on Mondays only using the dayofweek variable and setting it equal to 1 which represents Monday. Two equal signs are used for the equal to condition.

Bysort can be used to run a line of code for every category of a second variable. For example, we can get the summary statistics of flight distance for each day of the week.

The hist, scatter and graph bar commands can be used to make a histogram, a scatterplot and a bar chart respectively. There are many options that can be added to modify all graphs. These options come after the comma. The list of options possible can be found in the help file of each command. Some options can be applied for all or most graphing commands. Title() can be used to add a main title. Xtitle() is used to specify the label of the x-axis. Ytitle() is used to specify the label of the y-axis.

The normal option adds a normal curve on the histogram. Bin() allows the user to specify the number of bins. Color() and lcolor() are used to specify the color of the bin and the border around the bin. 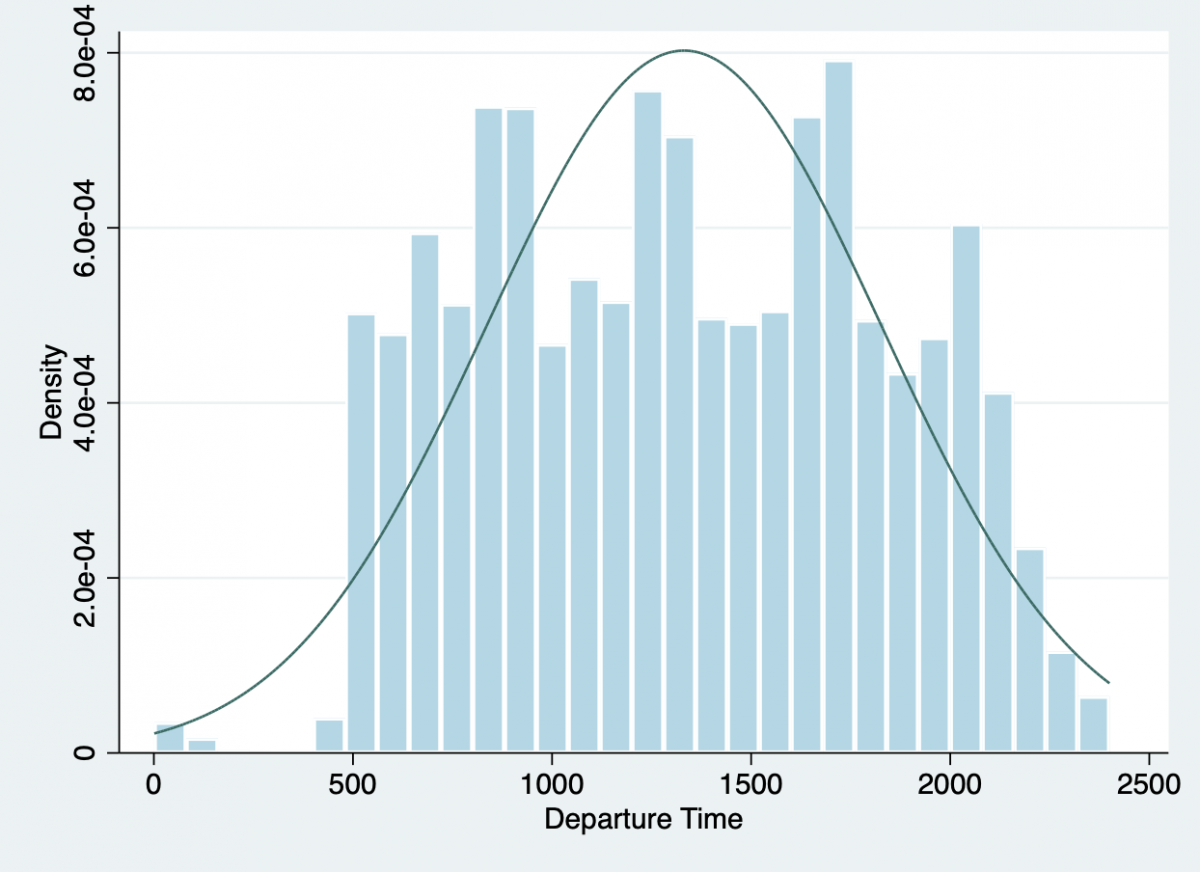 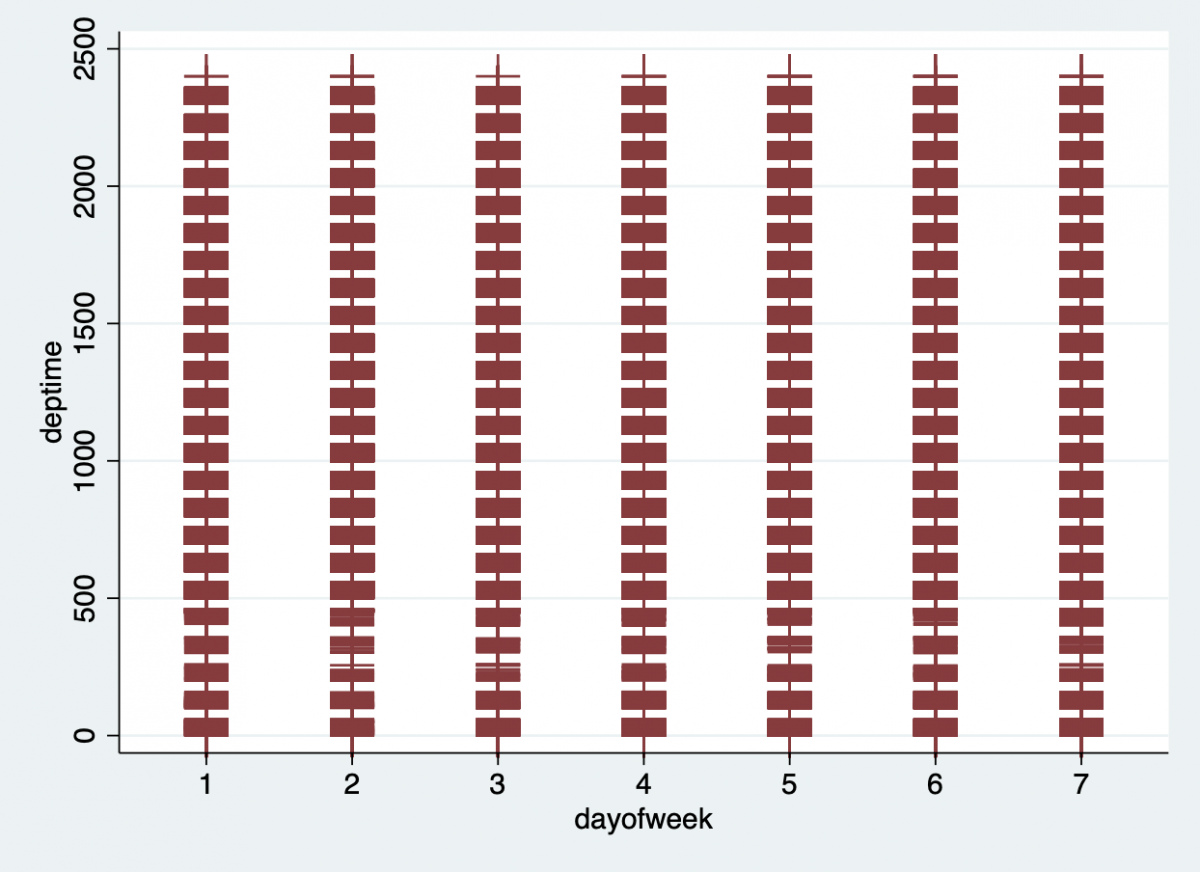 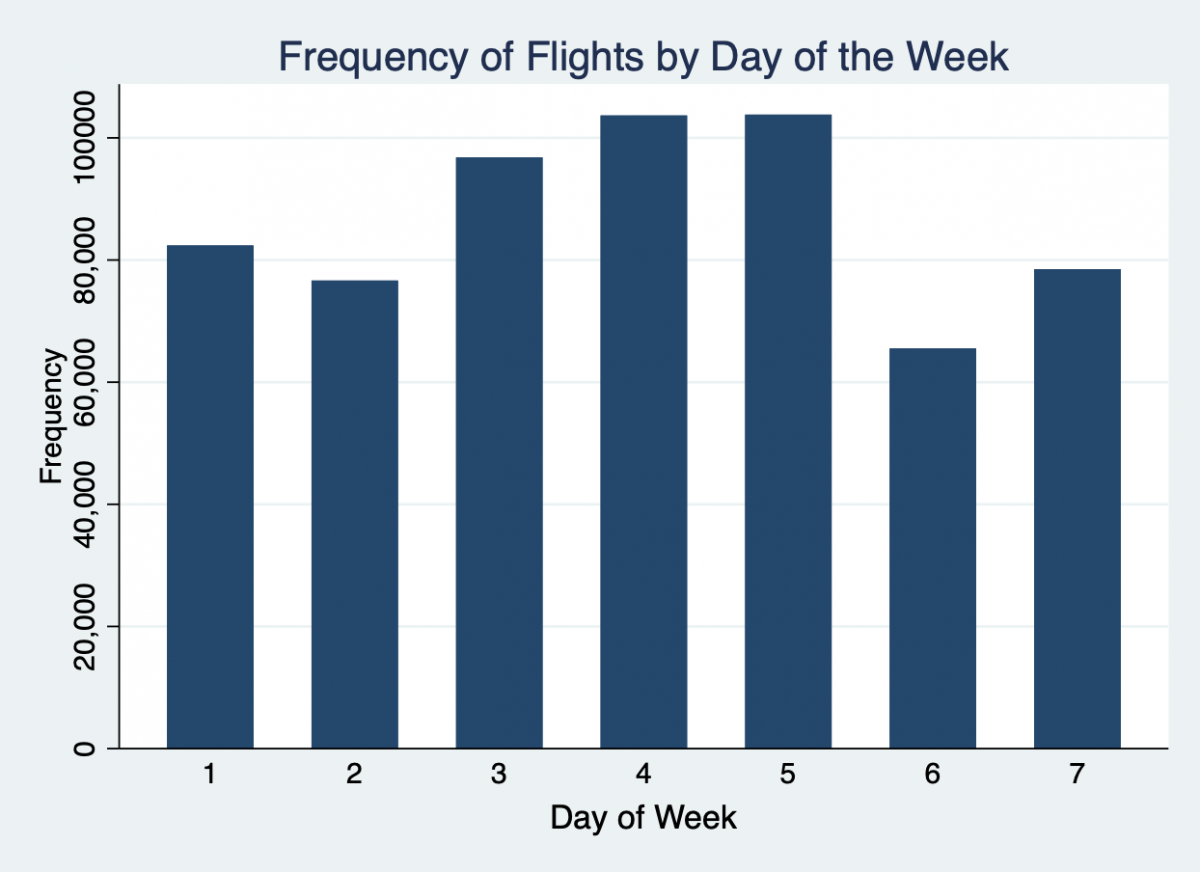 You can continue a line of code over multiple lines by adding three forward slashes at the end of the lines that continue.

To generate a new variable that is a function of other variables, use the generate command. You will find a few examples of how to create different types of variables below. In the first example, the variable distancemiles (distance in units of miles) is created by converting distance in kilometers to miles.

The original flights dataset now has 5 new variables. This can be checked in the variables window. The save command can be used to save this flights dataset. It is good practice to use the replace option.

Keep can be used to extract a part of the dataset. You can extract specific variables or observations based on criteria.

To merge two datasets, sort each one by the merging variable first then use the merge command to combine them. Whenever you merge two data files, a variable called _merge is created in the merged dataset. This variable helps you identify the observations that were successfully merged.

In this section, we create two new variables departureflights and arrivalflights that represent the total number of departing and arriving flights for each airport using _N. This total will be repeated in every row for a particular airport. To obtain a simple table of these totals by airport, we use the collapse command to shrink the dataset to contain only the first value of departureflights and arrivalflights variables for each airport. Then we export this dataset as an excel file using the export excel command.
The commands preserve and restore are used to temporarily modify a dataset and export it before returning back to the way the dataset was before the preserve command. In our example, after the airport dataset is created and exported, it returns us back to the flights dataset. For this code to work, you will need to run the lines from preserve to restore together.

To reshape a data set between wide and long format, use the reshape long or reshape wide commands. For a data set in wide format, the variables that denote the repetition should be named with the variable name followed by a number (i.e. variablename#). For example, in our data set we have drug1, drug2 and drug3. The numbers do not need to be consecutive. 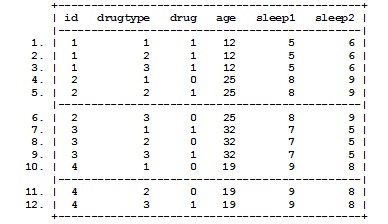 The ssc install command can be used to install packages from the SSC archive.

[1] The flights dataset is modified from the original version on the Kraggle website.
[2] Additional resources to learn Stata.
[3] The tutorial code and the workshop Powerpoint presentation can be downloaded from here.